This is part one in a three part series on ROWE. It will cover pluses and minus and common mistakes made (I’ve made them all) and the right way to implement it. 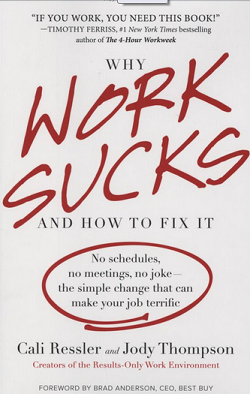 The principals of ROWE are simple. If you get your work done, it doesn’t matter when you do it, how you do it, how long it takes, or what you are wearing or where you do it. If you meet your objectives, your job is done. It eliminates the need to stay late to impress the boss or to miss your child’s baseball game because the employee manual says you have to be in your seat from 8:30-5:30 every day.

I’ve worked for and consulted for companies that operated in a ROWE. The concept originated, at least publicly, in the book Why Work Sucks and How to Fix It by Cali Ressler and Jody Thompson, two former Best Buy employees who implemented ROWE there. My first reaction when I heard about the book was “why would anyone take management advice from Best Buy…didn’t they just close 100 stores and nearly file for bankruptcy?” Nevertheless, many of the premises of the book are right on target.

Both ROWE companies I’ve been involved with are as virtual as you can get. There are no mandatory meetings, no office hours. In fact, the average size of both companies is 40 team members and neither office would hold more than 15 people comfortably. Most people worked from home, coffee shops, or their own office.

Who ROWE is right for:

ROWE can be great for most modern companies, particularly those in service, IT, creative services, and other digital services. Service companies usually get at least four hours more coverage, so a normal 9:00-5:00 company gets coverage from 7:00-7:00. That is a win for everyone, especially the customers. More creative companies can get an early start or late finish outside of “normal business hours” to think. This allows people to work at the optimal times for their minds. See below for more on this.

ROWE is also very dangerous if not done right. Both companies were in a ROWE before I came on board. At the first company, I was in what I like to call “second tier leadership” and was not in a position to say “here is where you are screwing this up.” The second, for which I consulted, allowed me to speak more freely.

I will cover the negative aspects of ROWE and mistakes I’ve seen and made in the next post and finally in part three, the “musts” to effectively implement it. For now, here are the biggest pluses and benefits to ROWE.

Stay tuned for parts two and three in this series to learn about the negative aspects and the wrong and right way to implement ROWE. Subscribe to my RSS feed or get posts via email so you don’t miss a post.

Have you worked in a ROWE or known someone who has? What were some of the biggest benefits?