What’s the secret to getting more done in less time? The secret lies in taking the path of least resistance, which is exactly how I helped a coaching client cut his work time by 20% and increase his productivity by 30%. 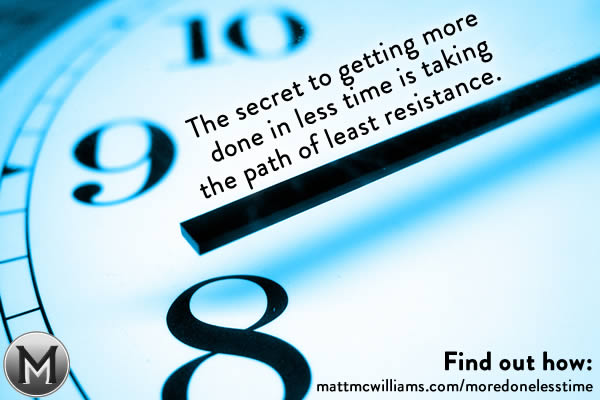 Whether you like it or not, human beings are wired to take the easy route. There is nothing wrong with that. It’s a survival mechanism ingrained in us from our days as hunter-gatherers.

The path of least resistance is why doctors trying to get their patients to exercise suggest having their gym clothes out in the morning. And not going to a gym at all. For me, taking 30-45 minutes to go lift weights at home or go for a run is five times more likely than getting me to drive 10 minutes to the gym, get out, find what I need there, and then…gosh, forget it, I’ll just eat this cupcake and watch a movie.

So the secret to getting more done in less time is to use this trait to your advantage. That’s what I did with Brian.

He’s the client I wrote about yesterday. If you want the backstory on how badly he was overworked and how poorly he was performing, read his story here.

The news sites, his cell phone (which was constantly buzzing), and his email were all within easy reach. To solve his problem and help him to get more work done in 45 hours a week than he was in 71, I just made it hard to access those things. We used the path of least resistance to his advantage and you can, too.

1. Disable all the shortcuts on your computer.

I know, this sounds backwards. They are called “shortcuts” for a reason. They make life simpler, right?

Wrong. The ironic thing is that all those shortcuts make it easy to get distracted. By adding an extra step to checking email, opening a browser, or reading an RSS feed, Brian was less prone to distraction.

This change alone led him to checking the news and email 75% less often.

Often, the short amount of time it takes for your email to load or the website to load is enough of a deterrent.

One extra hoop I made Brian jump through was entering his username and password every time he checked email.

By the time he’d done this, Brian reported checking his email only six times per day. These two simple changes literally gave him five hours of his life back each week. Five hours!

What is your default home page? Is it a news site or some other distracting site, or even your email? If so, change it.

Brian changed his from his RSS reader to a blank page. That alone ensured he would start the day off right.

4. Leave your phone off and across the room.

Brian reported checking his phone an average of nearly 20 times per day. He also reported that having it on him at all times would lead to longer breaks as he would get sucked into news articles, emails, text messages, etc. (That’s why I don’t have a smartphone)

Leaving his phone off and away from him during the day reduced distractions by 10-20%, he said. And it can do the same for you.

If someone genuinely needs him (i.e. his wife), they just call his work line.

Action Item: Pick one of these ways to reduce distractions and act on it. Make it hard to do something that distracts you. Use the path of least resistance to your advantage.

That third call, when we first started working on this, was five weeks ago. Brian was working an average of 65 hours each week and barely managing to keep up.

Today, he isn’t quite at his goal yet. He is still working on this. It will take time. But, he’s down to 52-55 hours each week and finally getting ahead on projects. His to-do list is getting smaller. He is happier and so is his family.

He even managed to make it to a baseball game last week.

In only five weeks, he is:

That’s what I call a win-win!

If you are struggling like Brian and want to learn more about getting more done in less time, set up a one-on-one consultation with me to find out if personal coaching might be right for you.

Question: What have you done to reduce distractions and get more done in less time? You can leave a comment by clicking here.

Category: Productivity
Disclosure of Material Connection: Some of the links on this page above are “affiliate links.” This means if you click on the link and purchase the item, I will receive an affiliate commission. Regardless, I only recommend products or services I use personally and believe will add value to my readers. I am disclosing this in accordance with the Federal Trade Commission’s 16 CFR, Part 255: “Guides Concerning the Use of Endorsements and Testimonials in Advertising.”