The belief systems you have today are usually the result of events far in your past. They come from moments you can’t remember, words stuck in your mind, and people you wish you could forget. Little do we know that what happens to us today can have far-reaching implications later in life, for better or for worse. 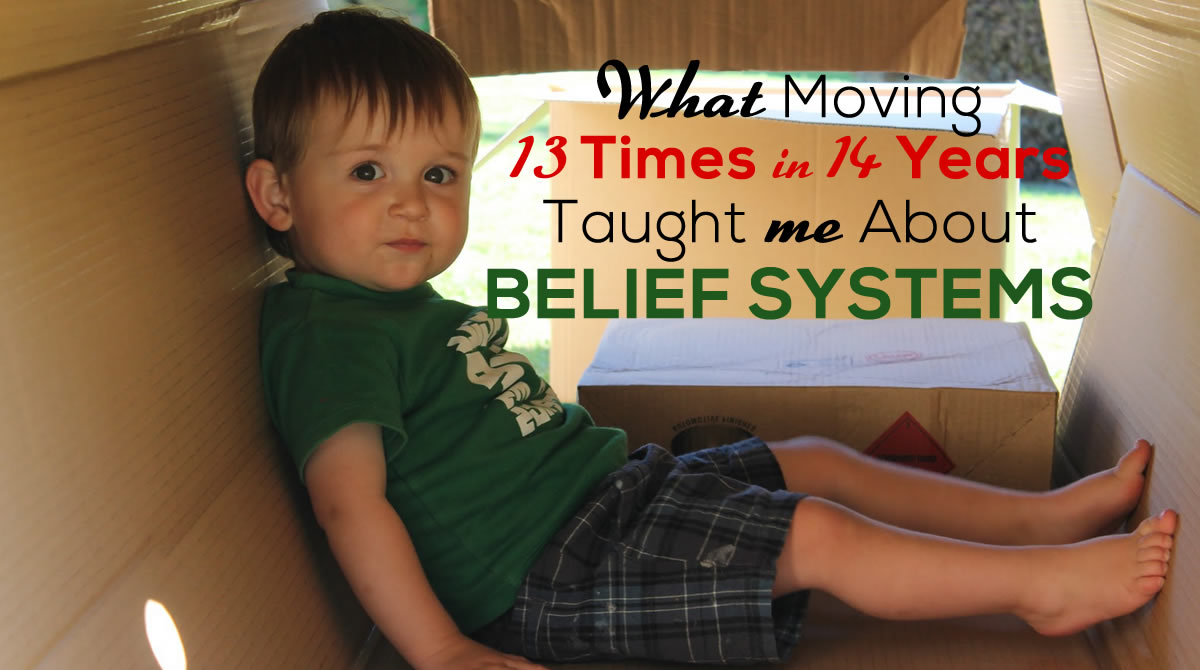 BONUS CONTENT: Limiting beliefs are one of the most crippling forces in our lives. If you’re ready to put an end to those beliefs once and for all, I’ve put together a FREE guide to help you through that process. Look for it at the end of this post or Click Here to Get it Now!

When I was fourteen years old, I moved. Imagine that situation. It was an already volatile time in life…right before high school…and suddenly I was uprooted from my friends and my surroundings to move to a new town and go to a school at which I knew no one.

For most teenagers, moving to a new town right before high school would be devastating. For me, it was the norm. It was my thirteenth move in fourteen years.

Fast forward more than two decades later and my belief systems have been shaped by all those moves. A few months ago, I noticed that I was getting restless. After all, we’d been in the same home for more three years. This was foreign to me.

I couldn’t figure out why I felt this way until I realized that I had a limiting belief that told me: “You’ll never be comfortable settling down for long. You have to move around to be at peace.”

When Tara and I first started dating, I remember being in awe that she had lived in the same home for almost all of her childhood. I simply could not relate to living in the same town for more than two decades, playing with the same friends year after year and always being near family.

The Negative Effects of Limiting Beliefs

This belief that I could never settle was holding me back. It was keeping me from enjoying all the benefits that come with settling down and being a part of a community.

Your limiting beliefs not only harm you, but those around you.

This belief also had the potential to affect my family in a negative way. If I gave in to my limiting beliefs, it could prevent our daughter and future children from knowing the benefits of having lifelong friends and being close to family, both of which have been proven to increase our health and happiness. It dawned on me one day that this belief could damage, or even end, my marriage.

That’s what limiting beliefs often do. They not only harm you, but those around you. They keep you from fulfilling your calling in life, from living out your dreams, and from achieving the levels of success you want to achieve. That’s bad enough. But the worst part is that you often pass them on to others around you, potentially starting a generational cycle that is difficult to break.

So what did I do?

I did what I write about in my free workbook, How to Destroy Your Limiting Beliefs.

This seems obvious enough, but it is often the hardest part.

I had to acknowledge the belief as a limiting belief. I had to admit that I had a problem.

Until you admit that your belief is harming you in some way, you cannot overcome it. You will continue to cling to it like a safety blanket, simply because it is familiar.

2. State how it is holding you back.

I literally wrote out how the belief was keeping me from being happier.

Whatever your limiting belief is, you must state in writing, exactly how it is holding you back. What is it keeping you from? How is it hurting you? Who else is it hurting?

When you put this in writing, it really shows you the damage that one simple belief can have in your life.

3. Ask yourself if the belief is really true.

Was moving thirteen times in fourteen years something I actually liked?

No! I hated it. I hated starting a new school. I hated packing. I hated trying to find my way around town. I hated making new friends every year. I hated everything about it.

So, then, why was I feeling unsettled after staying put for a few years? Simply because unsettled had become normal for me. And we tend to gravitate towards our own version of normal.

My belief that I am only comfortable moving around was clearly not true. For most of my childhood, I longed to settle down and establish roots somewhere.

When you ask yourself if the belief is really true, you will often see how ridiculous it is. That allows you to push it aside and continue with step four…

Once I acknowledged the belief as negative, stated how it was holding me back, and identified it as a lie, it was easier to replace the belief with truth.

Until you admit that a belief is harming you, you cannot overcome it.

Over time, I was able to replace the negative beliefs with positive ones by reminding myself constantly of the benefits of staying put and establishing roots. I spent time picturing how great it would be to raise a family here.

None of that is to say we might not move, but if we do, it will be with a specific purpose and calling on our lives, not just because I am unsettled.

Take the time to replace the beliefs intentionally. State the positive benefits of the new beliefs over and over. Create powerful visual pictures of what it would look like living out these new beliefs.

Over time, they will become your new default beliefs…and they will not limit you at all.

Granted, this is an overly simplistic outline of the steps, which is why I have an entire 32-page guide available. It’s totally free, too. You can get it here.

I learned that our belief systems come from the strangest places and that they can work for good or for evil. I also learned that while they may have been ingrained in us for decades, they can be overcome with hard work and the right attitude.

What beliefs have held you back?