Do you ever feel like you are working more but getting less done? Have you ever ended an eight, nine, or ten hour day scratching your head wondering what you accomplished? Or, as a coaching client of mine admitted he’d experienced, you’ve worked a full day and not eliminated one item from your to-do list? 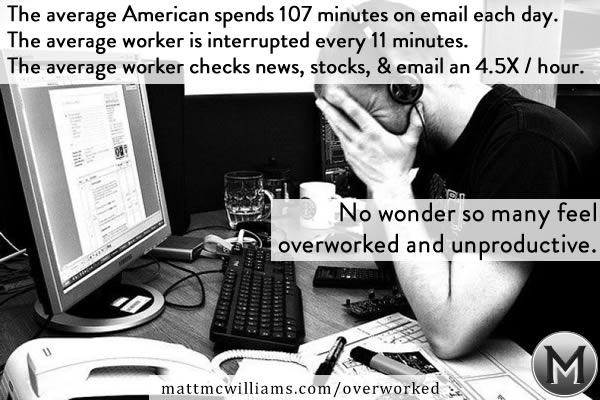 Don’t worry. If you answered yes to any of these questions, you are normal. And that is the problem. You don’t want to be normal. You’re a world changer. You want to get things done.

On our third coaching call, the coaching client of mine I mentioned earlier (we’ll call him Brian) was at his wit’s end. It seemed like his to-do list was only getting longer. He finished the day exhausted and never seemed to accomplish anything. Eight-hour workdays soon became nine, then ten, and last week his wife actually tallied up the hours he spent at work…71 hours!

Now 71 hours may not seem like much if you’re a single, childless entrepreneur. But to Brian, this was overboard. He had vowed to be a family man. He’d vowed to be there for his boy’s baseball games and his daughter’s dance recitals. Now, he was gone before they woke up, often missing dinner, and his family seemed distant to him.

“All I do is work,” he said in exasperation.

“Gee, thanks,” Brian laughed. “Just what I’ve always wanted to be: normal.”

The first thing I set out to do was to diagnose Brian’s problem. I asked him to spend the next three days charting his every move. Every 15 minutes, he needed to record what he’d done over the past quarter-hour.

This is what one hour looked like (see if you can relate):

10:00 – Checked email. Responded to 3. Read a newsletter.
10:04 – Read headlines on news sites. Got lost and read more than he intended.
10:09 – Checked email. One new reply. Responded to that.
10:10 – Grabbed snack from the fridge. Respond to text message from a friend about a business dinner tomorrow night.
10:14 – Started new marketing project.
10:22 – Responded to email that just came in. Saw another email and checked out the link. Researched a potential company for live chat on his site.
10:34 – Wife reminds him to research kitchen remodeling companies. Spent 10 minutes on that.
10:44 – Back to new marketing project.
10:55 – Email from team member – check and reply. Reminded him to update a task list for them.
10:56 – Updated task list.

That’s just one hour. It’s not even his worst hour. In fact, it’s one of his better ones. Yet, here’s what stands out:

No wonder they finish the day exhausted and yet feel they accomplished nothing.

I know I can relate. Been there, done that. So how to do you fix the problem?

Glad you asked because that is what we are covering tomorrow. So be sure to subscribe to my RSS feed or get posts via email (and get my free book as a bonus) so you don’t miss it. If you are struggling like Brian, set up a one-on-one consultation with me to find out if personal coaching might be right for you.

Question: What is your biggest struggle with overworking or underperforming? You can leave a comment by clicking here.

Category: Productivity
Disclosure of Material Connection: Some of the links on this page above are “affiliate links.” This means if you click on the link and purchase the item, I will receive an affiliate commission. Regardless, I only recommend products or services I use personally and believe will add value to my readers. I am disclosing this in accordance with the Federal Trade Commission’s 16 CFR, Part 255: “Guides Concerning the Use of Endorsements and Testimonials in Advertising.”