I hate the rain. 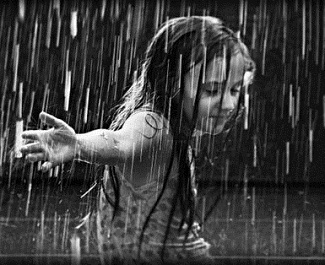 As an adult, rain means that I will cold and wet when I get to the office, that my gadget might get ruined, and that the grass will be harder to mow tomorrow. Rain means traffic is going to suck. My shoes will squish, and my perfectly styled hair will be ruined (you know…if I was a women I would say that, hypothetically).

To a child, rain is a special time of play. The water in your eyes, the cold on your neck, and the peacefulness that often comes with the white noise of a steady downpour; all of these are a thing of joy to a child.

What changed my feelings about rain so quickly and drastically from the age of fourteen to twenty? When did rain transform from the perfect playtime companion to an evil soggy monster? I’m not entirely sure, but there is definitely a connection between my changed feelings and my starting to wear cologne, using hair gel, and wearing a belt.

Three Memorial Days ago, my wife and I went to see my family in North Carolina. After lunch, we went out to play with my nieces, ages 7, 7, and 13 at the time. Shortly after we started to play, the skies opened up. It was a moment I had been dreading. They had been pregnant with rain for hours and now that we were outside, the enemy of my cologne and hair gel fell mercilessly from the sky.


But a curious thing happened just then. I remembered something my pastor had talked about only weeks before. Remembering the words of my pastor is one of those rare occurrences like Haley’s Comet or a meaningful Chicago Cub’s game, so I listened…to myself, to God, to the voice speaking to me saying, “Remember Haiti. Stay. Play in the rain.”

My pastor had told the story of how he had recently been on a mission trip to Haiti. On the way back to the hotel with his group, they were on the beach and the skies opened up on them. They first started running but soon realized they were soaked. And collectively or one-by-one, I don’t know which, they began to play. Grown men with gray hairs. Children at home, some in college. And they played in the rain.

They splashed puddles. They kicked mud. They played…like boys do before they discover girls and shirts with ego-boosting logos on them.

When he got back home, our pastor shared this story and told us that now, instead of the familiar refrain, “get in from out of the rain, children,” he calls out, “it’s raining, let’s go outside.”

And that is what we did with my nieces that day. We played. With water streaming down our faces and an occasional longing for the warm interior of my mother’s home…and dry clothes, we played. The other adults gathered in the garage and watched. Some even called us crazy. But my nieces still talk about that day two and a half years later. To them, a few hours in the rain created a lifetime memory.

Have you ever had a “play in the rain” moment…a memory that will last someone’s lifetime?