I hate to tell you this, but you’ve been lied to. If your inbox is anything like mine, it’s filled with all sorts of promises to get rich quick and become famous overnight. It seems too good to be true, right? That’s because it is. 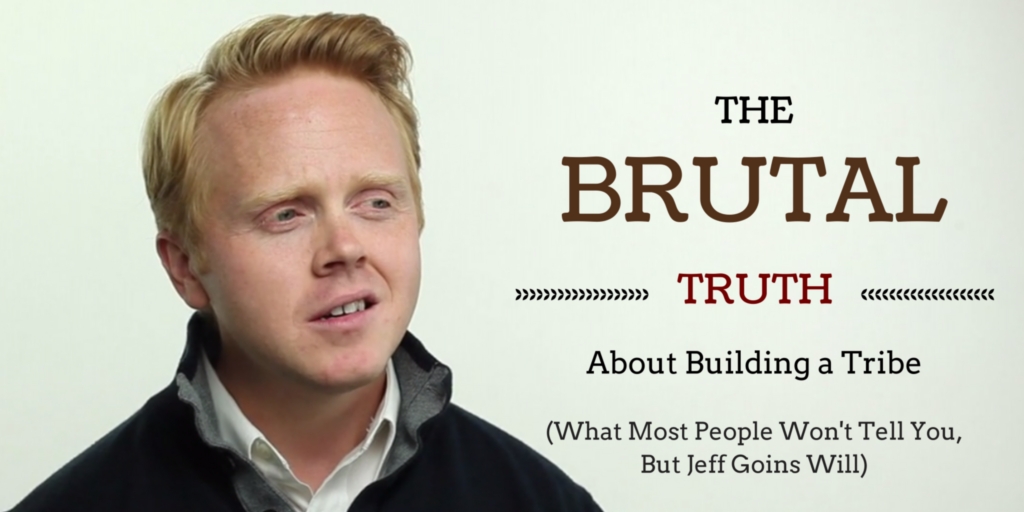 My friend Jeff Goins knows this all too well. He tried and failed to build an audience, a tribe, that would follow him and listen to what he had to say.

The thing is that what he had to say was important. His advice has literally changed my life. You can read about that here.

But, no one was listening.

What Do You Want to Be Known For?

What do you want to be known for? What are you already an expert in that you could build a labor of love or even a business around? What kind of people would be in your tribe?

Jeff wanted to be known as a writer, as a storyteller, but no one was following him. He labored in vain and yet had no tribe.

And then something changed. He stopped believing the lies about building a tribe and started doing work that matters. He started small but has grown his business to have an audience of more than 100,000 people.

And he wants to teach you how…but first he wants to bust all the myths and lies we’ve been told about how to build a tribe.

If you don’t know Jeff, he’s okay with that. In fact, he thinks that the Internet has spoiled our humility and made us expect things like “Internet fame” that are just plain silly.

That said, he’s the best-selling author of four books, popular blogger of Goinswriter.com, and a successful online entrepreneur and influencer.

But Jeff’s approach is unique. He doesn’t tell you what you want to hear (i.e. “you’re special” or “you deserve this”). He tells you what you need to hear.

That’s why he is offering a free video training like I’ve never seen before. He’s basically calling out the lies we’ve been conditioned to believe online.

And instead, he’s teaching a practical process about what it takes to build an online audience of 1,000 true fans and make your first $1,000 online.

Did you catch that? How to get 1,000 true fans, not “how to build an email list of millions.” How to make your first $1,000, not how to get rich quick. This is legitimate teaching for people who are serious about spreading their expertise, their opinions, and their influence.

If you are expecting outrageous claims, ridiculous promises, or vague generalities, let me assure this training has none of those.

It’s real. It’s not easy (nothing worth doing is, right?). And it’s specific.

It will show you how to do what he has done…the slow, methodical, sometimes challenging way.

This series will only be available for the next week or so. Don’t miss it! Sign up here to get notified when the videos go live.

What lies have you believed about building a tribe?

One thought on “The Brutal Truth About Building a Tribe”