I often get asked: “Why are you always so positive when you write?” Some ask in a curious way. Some ask in a negative way, as though I am doing something wrong. Some ask in a “how can I be more like that?” way. 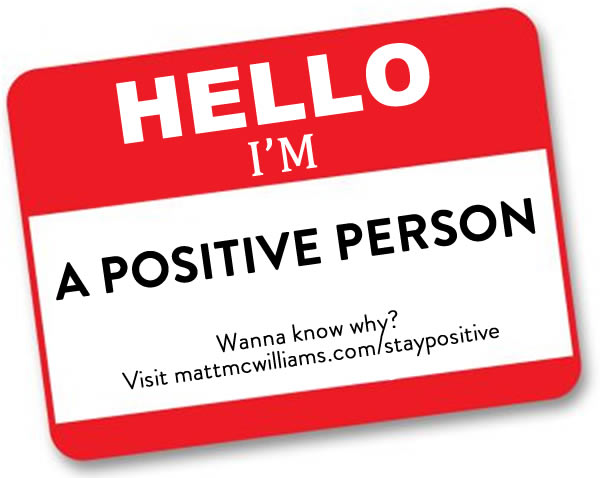 The reason I stay positive with my tribe is simple: I’m fostering a stereotype of myself and you. The research tells me to. I’ll explain below.

Let me be clear about something. My natural inclination, for whatever reason, is towards the negative.

That shocks a lot of people not named my wife, my mom, my best friend, my mentor, or anyone who has never worked for me. Most people see me as a generally positive and upbeat person. But the reality is that, most of the time there is a war raging inside of me. One voice screams at me reminding of everything going wrong in my life and the world. The positive voice whispers softly. I tend to hear the louder voice too easily.

So I stay positive. I perpetuate a stereotype that you believe and I slowly come to believe.

That doesn’t mean that I want you to ignore opportunities for growth (a better term for what others might call “weaknesses”). But don’t dwell on them. Acknowledge them. Work on them in a defined period of time. Then, turn your focus back to your positive strengths.

The science of stereotypes

Thirty-plus years of psychological research backs me up on staying positive.

I am creating a stereotype for myself and everyone in my tribe, including you. To those who suggest it’s all psychobabble mumbo jumbo, I say:

OK, I only think that. I don’t actually say it…at least not out loud. But, apparently, I will write it.


S. Alexander Haslam, Jessica Salvatore, Thomas Kessler and Stephen D. Reicher wrote about the power of stereotypes in their essay, How stereotyping yourself contributes to your success (or failure). You can download the entire essay for free here.

…stereotypes can promote failure but that they can also lift a person’s or group’s performance and be tools that promote social progress.

We often view stereotypes as bad. We rightly discourage group stereotypes based on race, gender, religion, or social standing.

But we also forget that stereotypes can be used in a positive light. Especially individual stereotypes.

I stereotyped myself in a positive way and the results spoke for themselves. Of the five tournaments I played as an amateur in the worst conditions, I finished 1st, 1st, 2nd, 6th, and 1st.

So I write to you and to myself to change your stereotypes.

I stay positive to change the labels you use to identify yourself.

I write to resist the negative voices of ourselves and others that say we can’t change the world.

Haslam and the others write:

Resistance, of course, is not always successful. Yet it is rarely entirely futile either. Indeed, history teaches us that change is as much a part of social reality as is stability. And when they are in our own hands, stereotypes can be essential to mobilizing the group for success as much as, when in the hands of others, they can be used as forces of restraint and failure.

Thus, the literature on stereotype threat delivers two fundamental lessons. The first is to beware of equating performance and ability, especially when dealing with differences between groups, and to understand the power that the expectations of others has over what we do. The second is to realize that we are not doomed to be victims of oppressive stereotypes but can learn to use stereotypes as tools of our own liberation. In short, who we think we are determines both how we perform and what we are able to become.

The choice is yours.

Allow negative stereotypes to rule your life. Or…create new ones.

As for me, I will continue to be positive. And slowly, but surely, change into the person I want to be.

Question: What stereotypes do you need to change about yourself? You can leave a comment by clicking here.

Category: Mindset
Disclosure of Material Connection: Some of the links on this page above are “affiliate links.” This means if you click on the link and purchase the item, I will receive an affiliate commission. Regardless, I only recommend products or services I use personally and believe will add value to my readers. I am disclosing this in accordance with the Federal Trade Commission’s 16 CFR, Part 255: “Guides Concerning the Use of Endorsements and Testimonials in Advertising.”