It’s easy to think that you have to have a massive email list to get on the leaderboard of your next affiliate promotion. That is simply not true. Today I share my takeaways from a conversation I had with my friend Matthew Loomis about how he finished SECOND in a major launch — outperforming people with lists 2 or 3 times bigger than his. 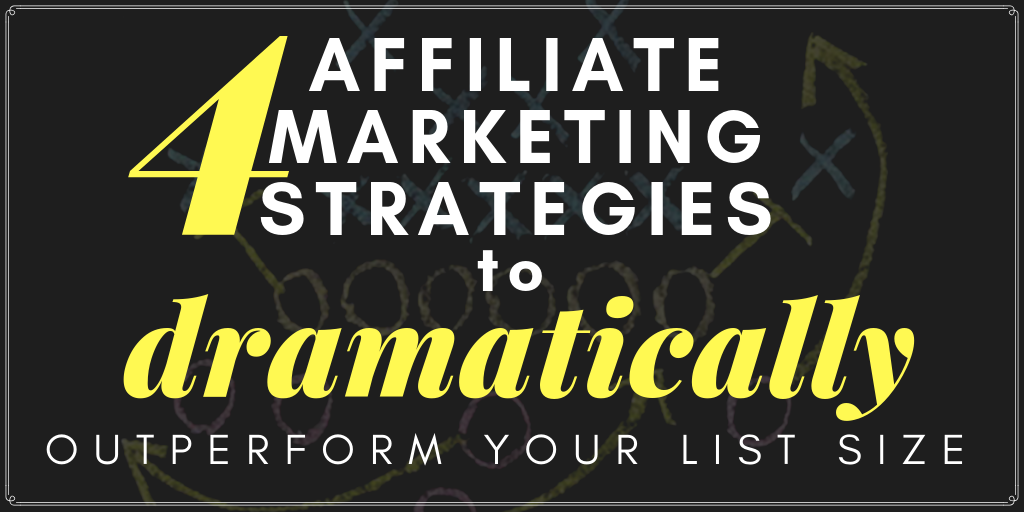 This article is part of my Ultimate Guide to Monetizing With a Small Email List. Check out the entire guide by clicking here.

Matthew Loomis surprised everyone (I’ll admit it…including me) when he finished second during the Fall 2016 Tribe Writers launch.He GREATLY outperformed his list size — beating out affiliates with much larger lists.

Recently, I had the chance to get on a video call with Matthew and talk with him about what he did to finish second place in a VERY competitive launch.

The main reason I wanted to talk to Matthew is that he “out-punted his coverage.”

That’s how I typically describe the fact that I was able to convince my wife to marry me. It basically means I married WAY above my level (I love you, Tara, thanks for saying yes!).

That is what Matthew did in this launch. He performed WAY above what I (or even he) thought he could.

What It Takes to Do What Matthew Did

It’s easy to look at affiliates that end up Top 10 in affiliate launches and say that there is no way that you could do what they are doing.

But the fact of the matter is, even if your list does not consist of tens of thousands of people, there are a few simple techniques and strategies that you can implement to greatly increase your optins and sales in your next affiliate promotion.

If you want to take a deep dive into Matthew’s story and the four strategies in detail, watch my full one-hour interview with him here.

During the launch, Matthew reached out to me several times and asked if we could jump on a call so he could ask questions about the launch and how to best promote it.

I was happy to do so and Matthew got a ton of value out of those calls.

One big reason was that Matthew and I had met at Jeff’s Tribe Conference a couple of months before.

Meeting in person made it possible for us to develop a relationship, which enabled us to better connect by phone during the launch.

I was able to give Matthew better advice and he was able to understand the advice I gave more clearly because of our in-person connection.

Technology is great, but nothing beats talking with someone face to face.

This is why I often host get-togethers with other online entrepreneurs, like the Epic Breakfast Club that I did with John Meese in Franklin, Tennessee a few years ago. We were joined by awesome people like Chris Ducker, Bryan Harris, Chad Allen, Ray Edwards, Nathan Berry, Mike Kim, Grant Baldwin, and Dan Miller. Make time to attend conferences for your industry or that your ideal clients attend. Host meetups of your own. It will pay big dividends for your business and your affiliate marketing.

I shared my biggest takeaways from Jeff Goins’ Tribe Conference in a two-part post here.

Matthew told me that he decided before the launch began that he was going all in.

For Matthew, it meant that he sent 21 emails about the Tribe Writers Launch in 17 days.

And he did it without any backlash from his subscribers…no dramatic increase in unsubscribes, no hate mail, and no spam complaints.

As I talk about in this video, don’t worry about unsubscribes when you’re promoting a product you believe in.

After extensive testing, I’ve found that there is virtually no increase in unsubscribes between my regular emails and when I go all in promoting an affiliate offer.

Heck, I once sent 10 emails in a single day for an affiliate promotion…with only ONE unsubscribe!

Sending 21 promotional emails in 17 days may seem like a LOT. But Matthew didn’t send all 21 emails to everyone on his list.

Because he segmented his list, none of his subscribers received anywhere near 21 emails.

Every new phase of the launch (ebook, video series, webinars, etc.) he would email to his entire list. However, after that, he would resend that email to JUST the people that did not open the first email.

This greatly increased the number of people who saw his emails throughout the launch.

If you aren’t using this strategy, I would highly recommend that you do.

Matthew was also very selective about who he sent the emails to once the cart opened and the focus shifted to sales. Prior to the cart opening, Matthew focused on promoting Jeff’s free pre-launch content (PLC). Once the cart opened, he focused his promotional efforts only on highly engaged contacts:

In this way, Matthew was able to increase his optins and sales, without offending or upsetting his list.

I talk in depth about this strategy in this podcast episode.

Use this Unique Bonus Strategy

During the launch, Matthew used a bonus strategy that I have not seen many affiliates use. And it paid HUGE dividends.

Instead of having a single bonus package, Matthew had several “micro bonuses” that he rolled out at different times during the launch.

It also creates multiple deadlines… and nothing moves people like a deadline!

Nothing moves people to take action like a deadline.

Matthew Loomis was able to beat out much larger affiliates AND earn thousands of dollars in commissions by using these 4 strategies — and you can use them too.

Regardless of whether you have 100, 1,000 or, 10,000 people on your email list, these simple strategies will increase your affiliate commissions.

In my interview with Matthew Loomis, we talk in depth about these 4 strategies, how he implemented them, and how you can, too. Click Here to watch the full video.