Do you remember when you were a child and you played “make believe?” You were a spy, a doctor, an astronaut, or perhaps an athlete. You took on the persona of whoever you were pretending to be. You talked like a spy would, you thought like a doctor, you did the things that kind of person would do. In other words, you acted “as if.”

The dictionary defines “make believe” as:

pretending that what is not real is real

Kids have the most amazing imaginations. I am experiencing this with our daughter now. Aracelli is 3 1/2 years old and she was talking to my mother this week. She told my mom all sorts of amazing tales of adventure, of dogs flying airplanes, chasing the deer through the woods, and doing all sorts of wild and exciting things.

Imagination, though, doesn’t just apply to the times when we all wore superhero caps and flew through our yards. That same imagination you had when you were a child is still there. It’s deep down inside of you.

You have that power inside of you.

Taking imagination to the next step

You also have the power to take imagination to the next step.

To act as if what you imagine is true. Just as you did when you were a kid.

When you pretended to be a doctor, you were in character. Others called you “Doctor.” You commanded attention. You performed flawless surgeries.

You acted as if you were a doctor.

That is the next step in imagination. Acting as if what you imagine is true.

What do you really want to be?

What do you really want to do?

What do you really want to have?

Those are three powerful questions that you probably rarely ask yourself. More likely you say things like:

You sell yourself short. You aim for mediocrity and you hit it spot on. You wonder why there is that gnawing feeling deep in your soul. To be more. To do more. To have more.

It gnaws and gnaws for a time, but eventually fades away. You settle. You adjust. You give up on your dreams and your calling.

What do you really want to be?

What do you really want to do?

What do you really want to have?

Until you answer those questions, you have nothing to imagine.

Once you do answer them, the floodgates to a whole new world are opened to you. Your imagination flows. Your dreams come alive again.

Your vision is increased. It gets bigger.

The problem with big visions

But there is a problem with big visions though.

When you think big…I mean really BIG, that first step is often invisible. Not just the rest of the staircase…the very first step.

That’s when imagination kicks in.

All you need is to find that first step. It’s the key to a life of purpose, influence, excellence, and abundance.

And it’s not in your cubicle. It’s not in a book. It’s not in the well-meaning words of friends or family. It’s in your imagination.

Go to that place…that magical place in your mind.

And then take the next step: 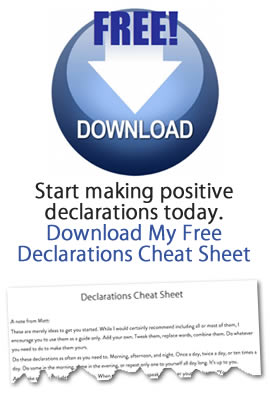 Whatever you want to be, act as if you already are that person.

If you are an entrepreneur and want to someday be on the cover of magazines, act like successful business owners act. Think big. Learn the skills now that you might not need for years.

If you are stuck in a cube and one day want to break free, own your job. Become the best at whatever your job is. Treat your job now like it’s your business. Then, when you have your own, it will be like second nature.

For an entrepreneur, every success is an amazing high and every failure is devastating. The daily ups and downs of being a business owner often feel like life and death. Learn to think that way before you ever start your own business.

If you dream of being a CEO, act like it now. Learn to talk like a CEO (hint: it’s usually in bullets, very on-topic, and slower than you think…CEOs think things through). Walk like a CEO, write like a CEO, and go to the same functions and seminars that CEOs you know are going to.

Warning: Acting like a CEO doesn’t mean taking his or her parking spot. While that might be funny and I would love to see his or her reaction on video, don’t do it.

5 steps to acting as if

Right now or later today when you have twenty minutes or more, pick one thing that you want to be, do, or have. To be a best-selling author, to be a veterinarian, to adopt children, to _____.

Now live that out in your mind. Don’t skimp on the details. Take your time. What actions do you take each day? How do you walk, talk, and carry yourself? Who do you hang out with? What is your schedule like? What are you wearing? What sounds do you hear? What feelings do you have? This should be a complete sensory experience.

Go live out what you just saw to the best of your ability. Act as if it’s reality. Make believe. Pretend that what is not real is actually real.

That is how you act as if.

That is how you use your amazing imagination to achieve extraordinary success.

How can you ignite your imagination today? What is something you need to “act as if” with?

4 thoughts on “This is Helping “Ordinary” People Have Extraordinary Success”